webDSKY is an emulation of the so-called “DSKY” (an abbreviation of “DiSplay and KeYboard”, pronounced ‘DIS-kee’) user interface of the Apollo Guidance Computer (AGC), for the Web Platform.

The goal of this project is to provide a visually and behaviorally accurate emulation of the DSKY. It is implemented as a re-usable Web Component so that it can be integrated into other components.

The DSKY itself is just a basic input/output terminal, not a computer. It will only really ‘come to life’ when connected to an emulation of the Apollo Guidance Computer (AGC). However, on the demo included in this project, you can send some inputs to the DSKY and see some lights go on or off, and expect to get output events when buttons are pushed.

Here is a screenshot of what it looks like: 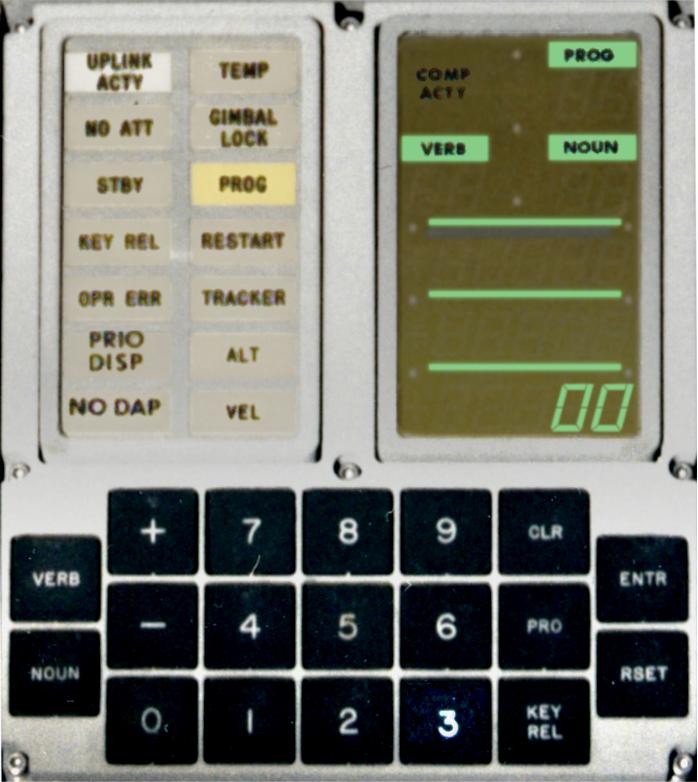 The visual basis of this web component is a photograph of a real, to-be flown DSKY of the Lunar Module of Apollo 16. The original photo is here which is linked from this page, which in turn is linked with the text “Pre-Launch LM Cabin Close-Out Photos” from the page Apollo 16 Surface Journal. I could not find a photograph of a real DSKY which is better suited for adaptation for this project. Using the GIMP editor I have deskewed a cutout of the photograph to be orthogonal, adapted contrast and brightness, extracted the glass labels (such as UPLINK ACTY or COMP ACTY) onto a transparent layer, and made the ‘glass’ of the warning lights semi-transparent. The shape of the 7-segment digits was thankfully found, documented and implemented as a font by Gene Dorr, even though I am not directly using his font here. I have generated SVG paths from this font so that it is possible to toggle individual segments, which the real DSKY supported partly, as documented by Ronald Burkey. I have taken the green-ish color value of the active electroluminiscent display from a photograph of the DSKY onboard the Apollo 11 CSM.

This implementation would not have been possible without the excellent resources on the Virtual AGC website.

The included images LM11-co46*.png are derived from this source image, and may, according to my layperson understanding of copyright, constitute a ‘derivative work’. However, I could not find copyright or licensing information on the origin page of the source image, so I cannot name the copyright owner, nor a license which is potentially attached to the image.